The AR-99 is an assault rifle featured in The Last Stand: Dead Zone.

The latest in the venerable AK series of weapons is this modern assault rifle, which uses a much lighter alloy-polymer construction and features several enhancements; such as ambidextrous controls, pic-rails, and improved recoil reduction during semi and full-auto fire. Full production of the rifle barely began in Russia just before the outbreak hit.

By unknown means, small numbers of this unique firearm have found their way into the Dead Zone.

Basically a high level version of the AK-74, this rifle deals incredible damage per shot, also possessing excellent accuracy and range. However, its poor rate of fire, combined with a long reload speed, means that a lone survivor can be overwhelmed quickly. It's best to group its wielder with other survivors, who can provide backup while reloading.

A survivor with a Scoped AR-99

Survivor with the Suppressed variant 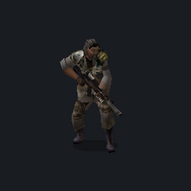 A survivor equipped with the Suppressed Scoped variant

A survivor using an AR-99
Add a photo to this gallery
Retrieved from "https://thelaststand.fandom.com/wiki/AR-99?oldid=130306"
Community content is available under CC-BY-SA unless otherwise noted.