The Answering Machine is a junk item in The Last Stand: Dead Zone.

Believe it or not, George isn't at home.

Found in many homes and in offices. 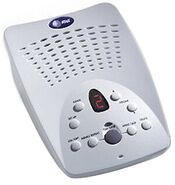 An answering machine in real life.
Add a photo to this gallery

Retrieved from "https://thelaststand.fandom.com/wiki/Answering_Machine?oldid=122618"
Community content is available under CC-BY-SA unless otherwise noted.