Any device that helps keep track of time can be considered a clock. In the past, sundials and hourglasses were commonly used to maintain schedules. Candles and incense burners also served as excellent timers, as they consumed their fuel at a constant rate. In 8th century China, the first mechanical clock was invented, and European explorers brought the invention back to Europe, where many new types of clocks were devised. Nowadays, digital clocks are used in most electronic devices, while quartz clocks are commonly used as indoor wall clocks. Old fashioned mechanical clocks that have to be wound occasionally to continue operating are still found in many heritage houses, museums, and the fireplace mantels of antique collectors.

Clocks are found everywhere, though antique ones are rare and typically very expensive.

There are no set locations for the Antique Clock to be found in. Having a low searching skill may assist in finding one. 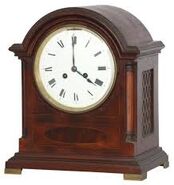 An antique clock in real life.
Add a photo to this gallery
Retrieved from "https://thelaststand.fandom.com/wiki/Antique_Clock?oldid=113868"
Community content is available under CC-BY-SA unless otherwise noted.