This customized chainsaw once served as a replacement hand for a man named Ash after his second encounter with "demonic possession" (possibly an early form of the zombie virus), in which his right hand was "possessed" and he was forced to amputate it. Any similarly maimed survivor would be well served by this legendary prosthetic.

How this unique weapon wound up in the Dead Zone is unknown, though it may have involved time travel.

Because of its high damage, high knockback and close to normal attack speed, this chainsaw can effectively kill armored and Bruiser zombies while still capable of mowing down hordes with relative ease. However, it shares the same weaknesses that the Chainsaw has, with its continuous noise generation and terrible attack speed. It should be supported by other weapons whenever possible.

The chainsaw from Evil Dead II 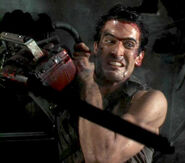 A promo image for the Halloween event featuring survivors wielding Ash's Right Hand and The Harvester
Add a photo to this gallery
Retrieved from "https://thelaststand.fandom.com/wiki/Ash%27s_Right_Hand?oldid=112801"
Community content is available under CC-BY-SA unless otherwise noted.