The Bashing Branch is a Z-Mas-exclusive blunt weapon featured in The Last Stand: Dead Zone.

The origins of this unusual weapon is unknown. Some say it was clever, ingenious design. Others say it is X-Mas decor used by a desperate survivor against the hordes of undead. There are even theories that it is a gift directly from Zombie Santa for good survivors. Regardless of its origins, the combination of pine needles and wreaths and Christmas tree lights can be used to deal some serious damage to Christmas-ruining enemies.

Can be crafted with certain materials available in a certain time of the year.

Much like its Halloween counterpart, this weapon uniquely provides increased melee resistance and reduced chance of sustaining injury, resulting in its wielders being far more durable. Unfortunately, its short reach exposes its wielder, and while each individual strike is strong, they also come rather slowly. Support from ranged weapons is recommended.

A survivor armed with the Bashing Branch 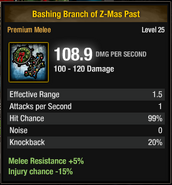 Z-Mas 2015 "Z-Mas Past" version
Add a photo to this gallery
Retrieved from "https://thelaststand.fandom.com/wiki/Bashing_Branch?oldid=120935"
Community content is available under CC-BY-SA unless otherwise noted.