The Big Bootleg Laser Sword - 2013 is a blunt weapon featured in The Last Stand: Dead Zone, introduced during the 5th anniversary of the game. It is a re-released version of the Stars Wor™ - Plastic Laser Sword.

A surprisingly effective weapon, it rivals many bladed weapons, such as the Tac-Blade, in terms of damage and attacks per second, while retaining the high knockback values enjoyed by other blunts. Its biggest weakness is the noise it continuously generates, making it impossible for survivors to stealthily pick off zombies from behind. Players should bring along stronger ranged weapons to take on the hordes of infected attracted by the noise. 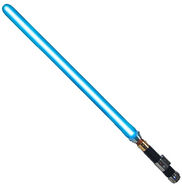 A lightsaber, the basis of the Laser Sword
Add a photo to this gallery
Retrieved from "https://thelaststand.fandom.com/wiki/Big_Bootleg_Laser_Sword_-_2013?oldid=123414"
Community content is available under CC-BY-SA unless otherwise noted.