The Blessed Blunderbuss is a Halloween-exclusive rifle featured in The Last Stand: Dead Zone.

When the first colonists landed here, they expected demons and monsters lurking behind every tree and rock, driving them to have their blunderbusses blessed to better purge the hordes of the supernatural. Alas, they only found other people, but on this All Hallows' Eve, these hallowed weapons can finally be used for their intended purpose.

Can be crafted with certain materials and knowledge. 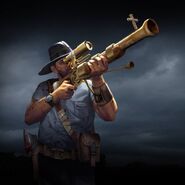 Promotional Facebook image featuring a survivor with the Blessed Blunderbuss

A survivor armed with the Blessed Blunderbuss

A flintlock blunderbuss in real life
Add a photo to this gallery
Retrieved from "https://thelaststand.fandom.com/wiki/Blessed_Blunderbuss?oldid=112804"
Community content is available under CC-BY-SA unless otherwise noted.