The Broken Radio is a junk item in The Last Stand: Dead Zone.

A transistor is a device that can adjust and switch electrical signals and power. Put that into a radio, and transistor radios were invented, becoming the most popular electronic communication device in history, with billions being manufactured before they were replaced in the 1980s by Walkmans and portable CD players. While they're seldom used nowadays, they remain an iconic symbol in the world of radio.

Many may still be found in the homes of Baby Boomers 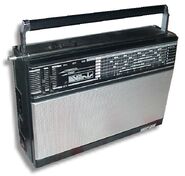 A transistor radio in real life.
Add a photo to this gallery
Retrieved from "https://thelaststand.fandom.com/wiki/Broken_Radio?oldid=124471"
Community content is available under CC-BY-SA unless otherwise noted.