The Camouflage Paint is a research component in The Last Stand: Dead Zone.

A military grade paint used to camouflage people and objects.

Camouflage has been used by the military since the 18th century to hide soldiers, and later objects, from the enemy. While there are many patterns and ways to apply camo, foot soldiers usually turn to paint to cover their faces, hands or other exposed body parts. Common colors include green, tan, and loam. 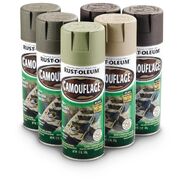 Different camo paint colors in real life.
Add a photo to this gallery
Retrieved from "https://thelaststand.fandom.com/wiki/Camouflage_Paint?oldid=131763"
Community content is available under CC-BY-SA unless otherwise noted.