Start a Wiki
The Can of Soda is a type of drink featured in The Last Stand: Union City.

Small can of soda.

Originally known as soda water, this was first invented by pumping carbon dioxide into sugary water, giving it that familiar fizz. For decades, groups of friends and family would often gather at soda fountains to unwind and socialize. With the invention of the metal can, this drink can easily be brought and drunk just about anywhere, making it one of the most popular drinks in the world, next to water, tea, and coffee.

With the zombie apocalypse fast approaching and food supplies quickly dwindling, a can of soda may be the fastest pick-me-up for an exhausted survivor to get back into the Dead Zone.

It only restores 1% Food, making it the worst food item in the game. It also has a terrible effect to weight ratio, next to the Bottle of Soda. Players should only stock up on this when nothing else is available. They can be found in vending machines throughout Union City. 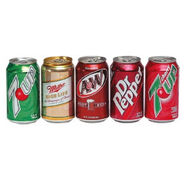 Some popular brands of soda in real life.

A can of soda dropped by a zombie.
Add a photo to this gallery
Retrieved from "https://thelaststand.fandom.com/wiki/Can_of_Soda?oldid=103225"
Community content is available under CC-BY-SA unless otherwise noted.