Can of sweet corn.

Can of sweet corn.

Corn has been a major food crop in many countries, due to the fact that it's easy to grow, easy to industrialize, and is used in many products. In addition to being a sweet meal, corn is also used in ethanol and as fodder for many feedlots around the world. Its high nutritional content and sweet taste makes it a treasure chest for even the pickiest of survivors.

It restores 10% Food, a very high amount compared to most foods of the same weight. Players should stock up on these when better meals, such as MREs, cannot be found. They can be found in kitchens and stores throughout Union City.

, but every bit counts. 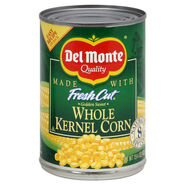 Canned corn in real life.
Add a photo to this gallery
Retrieved from "https://thelaststand.fandom.com/wiki/Canned_Corn?oldid=103217"
Community content is available under CC-BY-SA unless otherwise noted.