Can of mixed summer fruits.

Can of mixed fruit.

Fruits, despite the ease at which they spoil when exposed to the elements, are a convenient yet tasty source of vital nutrients. With the development of airtight cans, even this one drawback has been rectified, allowing people to enjoy their favorite fruits on the go without needing to lug an icebox around. The citizens of Union City were particularly fond of canned mixed fruits, with thousands of cans consumed every year.

It restores 10% Food at only 0.5 lbs, making it very reliable. They can be found in kitchens and stores throughout Union City.

, which is next to useless in the later levels. However, every little bit counts. 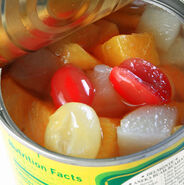 Canned fruit in real life
Add a photo to this gallery
Retrieved from "https://thelaststand.fandom.com/wiki/Canned_Fruit?oldid=103219"
Community content is available under CC-BY-SA unless otherwise noted.