Can of peeled tomatoes.

Can of peeled tomatoes.

Generally peeled whole plum tomatoes packed in juice or a puree, these are used when fresh tomatoes are not available for whatever reason. Typically used to make sauces and dishes that require tomatoes, like pasta sauces and pizza, they can also be eaten by themselves and are a good source of vitamins and antioxidants.

They can be found in kitchens and stores throughout Union City. It restores a large amount of Health and Food for its weight.

A low level drop, it only provides +1

. Every little bit counts, though. 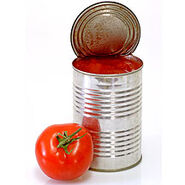 Canned tomatoes in real life
Add a photo to this gallery
Retrieved from "https://thelaststand.fandom.com/wiki/Canned_Tomatoes?oldid=104411"
Community content is available under CC-BY-SA unless otherwise noted.