The Carrier Harness is a type of passive gear featured in The Last Stand: Dead Zone.

The modern version of a bandolier, a carrier harness allows a soldier to carry more ammo on his/her body close at hand, as well as carrying additional grenades. Survivors needing to carry more explosive ordnance may well find this harness useful, although other survivors may find the traditional bandolier more convenient.

This piece of gear is best used for compound raids, due to the fact that it can hold more active gear and increases the reload speed. The Carrier Harness would best be given to an assault class, such as the fighter, since they are most likely to be wielding heavy firepower, and would have need to reload their weapons, as well as to clear the path with additional explosives. 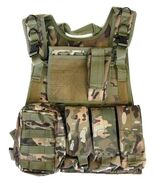 A survivor wearing a carrier harness
Add a photo to this gallery
Retrieved from "https://thelaststand.fandom.com/wiki/Carrier_Harness?oldid=105525"
Community content is available under CC-BY-SA unless otherwise noted.