Chips are a type of food featured in The Last Stand: Union City.

Bag of Chips. No dip.

Potato chips supposedly originated during the 19th century in a small American town, where a chef trying to please a picky customer decided to thinly slice a potato, fry the slices to a crisp and season it with tons of salt. Regardless of its true origins, it's one of the most popular snacks around the world, with many different local varieties, styles, and flavours. They're fattening, but they'll keep a survivor going for a while longer.

They only restore 2% Food, but their light weight means that players can stock up plenty of these early on. They can be found in stores throughout Union City and appear as a dark blue bag when dropped by zombies. 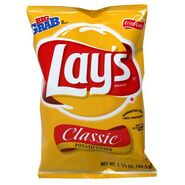 A brand of potato chips in real life
Add a photo to this gallery
Retrieved from "https://thelaststand.fandom.com/wiki/Chips?oldid=120503"
Community content is available under CC-BY-SA unless otherwise noted.