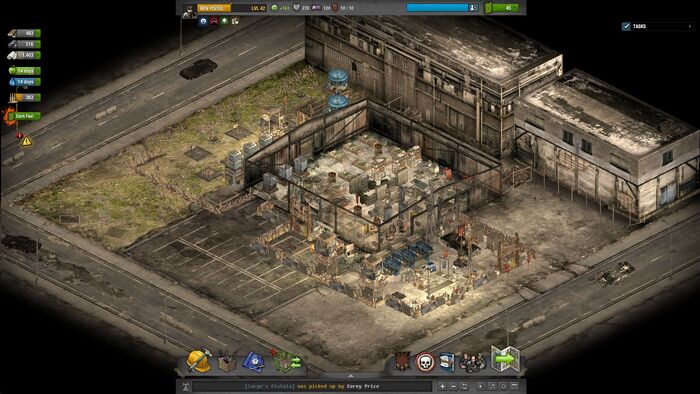 The Compound is the player's base in The Last Stand: Dead Zone.

Formerly an abandoned warehouse in the middle of Riverside North, it has been converted into a base of operations for a band of survivors. Many such compounds have been formed across the Dead Zone by Leaders, and they all follow the same basic layout.

All compounds have a warehouse with three entrances (one apparently added after its conversion) in the center, with a set of chain-link fences enclosing an alley on the only side of the warehouse without an entrance and a parking lot on the opposite side. The road ringing the compound has wrecked cars, concrete barriers and other debris on it, none of which can be removed. Its total size is 64 x 53 tiles (counting the unusable road and the fenced off alley), while the building itself is 27 x 25 tiles.

Any additional buildings or facilities that may be present, as well as their positions, may differ depending on the needs, means and whims of the group of survivors inhabiting that specific compound.

A generator is present in every compound, presumably brought in during the conversion of the warehouse. When fed with Fuel, it can speed up building construction, repairs, and upgrades. If there are only five minutes left on the clock, it can speed up construction/upgrades/repairs for free.

Neglect has left piles of debris and damaged, unusable machinery scattered throughout the compound. Junk takes up valuable space, but they also contain useful items and resources. Survivors can remove the junk piles, though it does take time. It can be sped up by tasking multiple survivors to the same junk pile or by fueling the generator.

Removing all junk piles from the compound is the goal of the Achievement Get It Out Of Here, which rewards 10,000 XP upon completion.

The Deathmobile is a car customized with additional armor, with one being present at every compound. When fed with fuel, it can be used to speed up the return of survivors from missions. It's also one of the only objects in the game that can't be dismantled, the others being the Rally Flag (If doing so would result in the compound having no rally flags at all) and the Alliance Banner if the player is in an alliance. If there are only five minutes left on the clock, it can speed up mission return times for free.

As the compound grows larger, more buildings will be needed to support it, as well as the survivors living there. In order to construct these buildings, specialized tools and planning areas must be made available. There are also all manner of specialized structures required in order to utilize some advanced capabilities, such as the Communications System and mass-recycling. Both fall under the General category.

The various resources needed to support the daily existence of the survivors and the construction of additional buildings are stored in the compound. Special storage facilities have to be constructed to contain them, ensuring that they do not degrade from exposure to the elements.

In a disaster situation, self-sufficiency is incredibly important, as scavenging for supplies can be unreliable at times. Various resources can be produced or collected at the compound, providing a safety net for the compound's population should the Dead Zone be unwilling to part with its bounty.

Zombies tend to be attracted by concentrations of survivors, and compounds are no exception. Many survivors will not join a compound that they feel is unsafe, and those already part of it will be unhappy about the lack of safety, negatively affecting their morale. Security buildings like barricades will assuage their concerns, as well as make the compound easier to defend when the inevitable happens.

The current maximum Security rating, with all security buildings built and fully upgraded, is 273.

Traps can be placed to impede the progress of both zombie hordes and human raiders, making it easier for the compound's defenders to fend them off. However, most traps can only be used once and require resources and/or components to rearm/rebuild, making it expensive to rely on them.

A compound is not only a base of operations, it is also the survivors' home. It is unlikely that survivors will join a compound with only the barest of amenities, and those already living there will not be pleased with such poor conditions, negatively affecting their morale. Comfort buildings like beds and showers make it easier for them to rest and relax, allowing them to fight and work with increased strength.

The current maximum Comfort rating, with all comfort buildings built and fully upgraded, is 125.

Miscellaneous Buildings are purely decorative buildings that serve to spruce up the compound. It can also be used for cover.

The player's compound as it appears on the map

The Deathmobile
Add a photo to this gallery

Retrieved from "https://thelaststand.fandom.com/wiki/Compound?oldid=122295"
Community content is available under CC-BY-SA unless otherwise noted.