An incident involving the infected at one of HERC's outposts resulted in the creation of this weapon when one of the operatives waged a highly successful battle against the escaped infected and credited his success to a new advanced electrical attack device that delivers high-voltage electrical lightning-like bolt attack that shocks and fries anything it touches.

Laboratory demonstrations are a poor substitute for actual field reports so HERC has issued it to their newly recruited operatives if the necessary parts can be found.

Possessing a decent reach, high knockback, and fast attack speed, the Arc-Burn nevertheless suffers from a high move speed penalty and a low damage per strike, making it a poor choice against hordes of zombies. It is best used with other weapons that can counteract the Arc-Burn's poor stats. 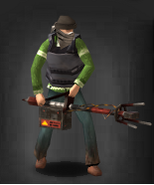 Survivor equipped with the Arc-Burn

Promotional Facebook picture showing the Arc-Burn 1600
Add a photo to this gallery
Retrieved from "https://thelaststand.fandom.com/wiki/Containment_Arc-Burn_1600?oldid=131214"
Community content is available under CC-BY-SA unless otherwise noted.