The Dinner Plate is a junk item in The Last Stand: Union City.

Plates are a simple, flat surface used for holding food. It's not clear who created the first plate, although many say Mother Nature provided the first plates, with large leaves such as the banana leaf being used. In the medieval era, trenchers were used as plates, and most of them were made out of hardened bread.[1] China excelled in the art of pottery and porcelain making, and soon they made their way to Europe, where they saw use amongst the royalty. As pottery became cheaper, they saw more use amongst the lower classes, who could now afford them. Today, cheap, disposable plates made out of plastic are often used, since they do not have to be washed, although they produce an incredible amount of garbage. Ceramic plates are still used today, and antique ones are often collected.

Found in any kitchen cupboard or dishwasher. 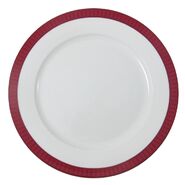 A dinner plate in real life.
Add a photo to this gallery
Retrieved from "https://thelaststand.fandom.com/wiki/Dinner_Plate?oldid=99205"
Community content is available under CC-BY-SA unless otherwise noted.