The Dishwashing Liquid is a junk item in The Last Stand: Union City.

Dishes don't clean themselves, so water and dish detergent are used together to get the grease, food scraps, and saliva off dishes. Dishwashing liquid contains water and grease-fighting detergents, which becomes foamy when exposed to water from the tap. The liquid is typically added onto a dishwashing sponge, which is then used to scrub and lather dishes before they are rinsed in warm water and dried. Apart from its dishwashing duty, the liquid is also used to make bubbles, clean clothes, and wash birds coated with oil.

Sold in many supermarkets and found next to or under kitchen sinks. 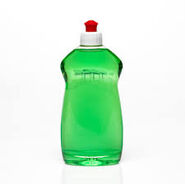 Lemon-fragrance dishwashing liquid in real life.
Add a photo to this gallery
Retrieved from "https://thelaststand.fandom.com/wiki/Dishwashing_Liquid?oldid=113748"
Community content is available under CC-BY-SA unless otherwise noted.