Satchel Charges are a type of active gear in The Last Stand: Dead Zone.

Used from World War II onwards for knocking out fortifications and obstructions, they can range from a stick of dynamite stuck in a satchel to purpose-built devices filled with the far more potent C-4. They are more than capable of vaporizing an infected horde or a rival compound's defenses, as well as any unfortunate survivors in the blast radius. Use with extreme caution.

Can be made with the right materials and knowledge.

When thrown by right clicking anywhere, then clicking on the desired target, an Explosive Charge will explode after a period of time, causing damage to anything within its Effective Range (including friendly survivors).

Charges are permanently consumed once thrown and each survivor can only bring a limited amount (determined by the carry limit) on a mission or raid.

It is characterized by an extremely high damage versus structures and a large effective range. However, it takes a long time to detonate, giving enemies time to withdraw. Survivors must also get very close before they can deploy it.

Unlike other active gears, it can be deployed within smoke, allowing survivors to utilize smoke and explosive charge combinations to demolish poorly placed enemy compound defenses. 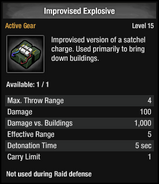 Level 15 Improvised Explosive
Add a photo to this gallery
Retrieved from "https://thelaststand.fandom.com/wiki/Explosive_Charge_(gear)?oldid=124322"
Community content is available under CC-BY-SA unless otherwise noted.