The F.U.E.L. Generator is a production structure featured in The Last Stand: Dead Zone.

The F.U.E.L. Generator produces Fuel over a period of 46 hours, which is stored in the Generator until it reaches full capacity. Once it reaches full capacity, production is stopped and will not resume until the Fuel is collected. Once collected, it will be added to the compound's stock of Fuel. Upgrades to this structure improve its temporary storage capacity and production speed.

Even if the Generator was not at full capacity when the Fuel was collected, it must be restocked with Wood, Metal and Cloth before it can produce more. It will also need to be restocked if the Fuel was stolen during a raid. Upgrading the generator does not restock it; moreover, the raised cost applies, so it's best to restock the generator before upgrading it. Books that affect repair costs also affect the restock costs. If restocked and then upgraded, the generator continues its production. Researching generator capacity will increase its production time. It's best to place this in an area that has the most protection and in range of survivors in the watchtowers.

If a F.U.E.L. Generator is attacked after being scavenged, it will stop working. Otherwise, it will continue working normally, as if it had just been restocked.[confirmation needed] 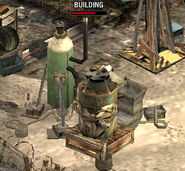 A F.U.E.L. Generator under construction

A F.U.E.L. Generator that needs to be restocked

F.U.E.L. Generator pumping out extra Fuel
Add a photo to this gallery
Retrieved from "https://thelaststand.fandom.com/wiki/F.U.E.L._Generator?oldid=131486"
Community content is available under CC-BY-SA unless otherwise noted.