The FAL Battle Rifle is a long rifle featured in The Last Stand: Dead Zone.

Although classed as a long rifle, the FAL performs more like a long-range Assault Rifle. The fastest firing long rifle in the game, it also comes with a large magazine and decent damage per shot, allowing its wielder to shred even decently-sized groups of zombies without needing to reload. However, its relatively low accuracy means it is best given to survivors with a high Ranged Combat skill.

The FAL in real life

A survivor wielding a FAL 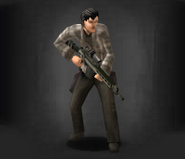 A survivor wielding the Scoped variant
Add a photo to this gallery
Retrieved from "https://thelaststand.fandom.com/wiki/FAL_Battle_Rifle_(TLS:DZ)?oldid=126668"
Community content is available under CC-BY-SA unless otherwise noted.