The Firing Pin is a component in The Last Stand: Dead Zone.

Firing pin from a firearm.

The firing pin is the part of a firearm that strikes the primer, causing it to burn rapidly and ignite the propellant. Firing pins are not to be confused with strikers; firing pins are triggered by the movement of the hammer, while strikers combine the mechanisms of firing pin and hammers into one. Firing pins typically have an integrated safety mechanism that prevents them from accidentally moving forward unless the trigger is depressed. 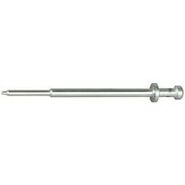 A firing pin in real life.
Add a photo to this gallery
Retrieved from "https://thelaststand.fandom.com/wiki/Firing_Pin?oldid=122457"
Community content is available under CC-BY-SA unless otherwise noted.