The Flashlight is a basic item featured in The Last Stand: Union City. It is attached to the player's firearm, shoulder, or, in the case of knives, held in the player's hand, and can be switched on and off to provide light in dark rooms or nighttime. It allows the player to improve visibility in low-light environments, making it useful when scavenging or keeping an eye out for zombies.

The flashlight is available from the very beginning, and can be used throughout the entire game. It is activated by pressing the F key. This sends out a long beam of light that illuminates anything in front of it, along with a small glow around the player. The light beam follows the path of the player's cursor, allowing the player to direct it in all directions. It can be switched off at any time by pressing the F key again. The flashlight has no power limit, and can therefore be left on for as long as the player desires.

Its main purpose is to allow the player to see better in darkness, and to add to the mood of the gameplay. Although the flashlight allows the player to better see his/her surroundings in darkness, it also has the downside of alerting zombies to the player's position. This makes sneak attacks and stealth difficult. A player can easily get through the entire game without once using their flashlight, so it comes down to personal preference whether to use it or not.

The light from the flashlight will emanate from the player's shoulder if carrying two-handed melee weapons or certain special weapons, and from the other hand when armed with a one-handed melee weapon. When using a firearm, the light source will come from a small torch positioned on the gun itself. 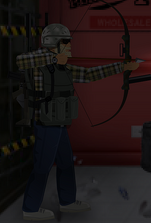 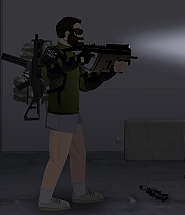 The SV-SMG is the only firearm with the flashlight attached to the top of the gun
Add a photo to this gallery
Retrieved from "https://thelaststand.fandom.com/wiki/Flashlight?oldid=120804"
Community content is available under CC-BY-SA unless otherwise noted.