Footlockers are a type of container featured in The Last Stand: Union City and The Last Stand: Dead Zone. They appear as rectangular green boxes, and are typically found wherever there is a military/HERC presence.

Searching them can yield military weaponry, such as Assault Rifles or Explosives, as well as ammunition for said weaponry.

These small green containers have a high chance of yielding weapons and weapon-related gear and components, and can be found in several locations, such as Warehouses, Streets, and the Convenience Store.

Larger black-colored versions with the same effect can also be found in areas like Police Stations, Security buildings, and Streets. 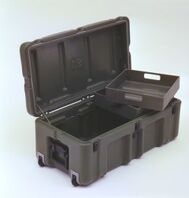 Two locked footlockers in the Military Base (TLS:UC) 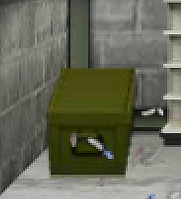 A footlocker lying in the Military Base (TLS:UC)

A footlocker parachuted into the forest reserve in Whistler's Forest (TLS:UC) 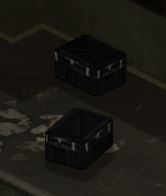 A pair of black footlockers (TLS:DZ)
Add a photo to this gallery
Retrieved from "https://thelaststand.fandom.com/wiki/Footlocker?oldid=90545"
Community content is available under CC-BY-SA unless otherwise noted.