The G18-MP is a Premium machine pistol featured in The Last Stand: Dead Zone.

A select-fire version of the G17 created at the behest of an Austrian counter-terror unit, which unfortunately did not achieve the commercial success of its more popular cousin; due to its extremely rapid fully-automatic mode being too difficult to control and causing frequent malfunctions.

The fastest-firing automatic in the game, it can lay down withering amounts of fire thanks to a large magazine, very high RoF and a very quick reload speed, but don't expect most of the shots to hit or do much in the way of damage. Putting it in the hands of a survivor with a high Ranged Combat skill is highly recommended. 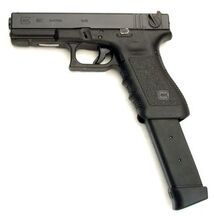 The Glock 18 in real life, with a 33-round extended magazine 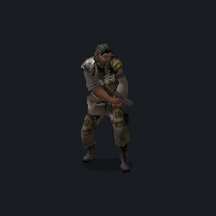 A survivor equipped with the G18-MP 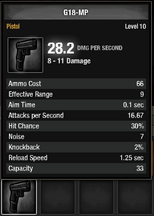 Glitched G18-MP showing it as regular pistol
Add a photo to this gallery
Retrieved from "https://thelaststand.fandom.com/wiki/G18-MP?oldid=116364"
Community content is available under CC-BY-SA unless otherwise noted.