The German Stahlhelm is a type of clothing featured in The Last Stand: Dead Zone, introduced during the 2017 Undead Blitz update.

Worn on the battlefield by German soldiers in World War 2.

The Stahlhelm was the standard head protection gear for German soldiers in World War II, used by the Wehrmacht and the SS. In 1942 the modell M40 was replaced by the modell M42, which was faster and cheaper to produce. Since the insignias on the side of the helmets proved to be a great target for snipers, most M42 helmets were produced without them.

A survivor with the German Stahlhelm. 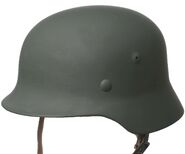 A Stahlhelm in real life.
Add a photo to this gallery
Retrieved from "https://thelaststand.fandom.com/wiki/German_Stahlhelm?oldid=128575"
Community content is available under CC-BY-SA unless otherwise noted.