Golden is a category of items featured in The Last Stand: Dead Zone.

GySgt[n 1] Gregor played an important role in HERC's occupation of Union Island. For unknown reasons, he amassed a large quantity of weapons and equipment from inside and outside the city and added a gold plating to each and every one of them. While his current whereabouts are unknown, some survivors have found said weapons around Union City, guarded by the zombies, or in Union Island, guarded by Gregor's subordinates.

Golden items are weapons or gear that have a golden coating but the same stats bonuses and conditions as their black counterparts. Some are available in Union City while others are only available in Rare and Unique Raid Hauls with their correspondent stats.

The following is a list of Golden weapons and gear: 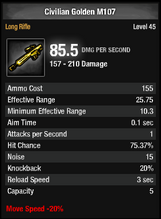 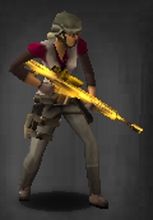 Survivor with Golden VS-121 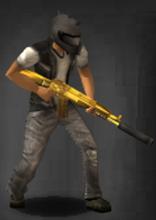 Survivor with Golden AK-105
Add a photo to this gallery

Survivor with Golden Recon Armor
Add a photo to this gallery

Retrieved from "https://thelaststand.fandom.com/wiki/Golden?oldid=120542"
Community content is available under CC-BY-SA unless otherwise noted.