The HERC-1 Baton is a blunt weapon featured in The Last Stand: Dead Zone.

The possibility of riots and revolts by disgruntled civilians is an ever-present danger in all evacuation zones. As a precautionary measure, HERC has adopted batons akin to those used by law enforcement, allowing their guards to non-fatally incapacitate agitated civilians should it become necessary.

A bigger and badder version of the Baton, the HERC-1 Baton is a vast improvement due to its higher damage and even faster attacks. However, keep its short reach in mind, as the user can get swarmed by large crowds easily. Support from other survivors is necessary against hordes. 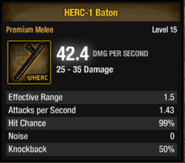 Add a photo to this gallery
Retrieved from "https://thelaststand.fandom.com/wiki/HERC-1_Baton?oldid=116806"
Community content is available under CC-BY-SA unless otherwise noted.