The HERC-24A1 is a long rifle featured in The Last Stand: Dead Zone.

HERC is the only known user of this variant.

Following in the vein of its standard-issue counterpart, this weapon can deal large amounts of damage with great precision, all from a relatively safe range. It also has a significantly faster firing rate, allowing it to deal more damage. Nevertheless, it still fires relatively slowly and doesn't do well against large, fast groups without supporting fire or melee cover. 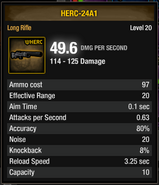 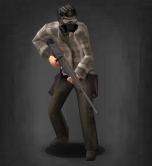 A survivor wielding the HERC 24A1

HERC-24A1 in action
Add a photo to this gallery
Retrieved from "https://thelaststand.fandom.com/wiki/HERC-24A1?oldid=126564"
Community content is available under CC-BY-SA unless otherwise noted.