The HERC-2 SMG is a submachine gun featured in The Last Stand: Dead Zone.

To fulfill their need for a cheap yet effective self-defense weapon for their support personnel, HERC adapted a common and inexpensive SMG to fire 9mm rounds from an extended 35-round magazine and added various accurizing modifications, making it a deadly weapon in close quarters.

Usually found in HERC camps that were likely to come under attack.

With a notably high accuracy and fine damage, this weapon is quite effective, especially for its low ammo cost. Unfortunately, it has a very low range and low fire rate, necessitating support from longer range, or acting as support for said longer ranged weapons. 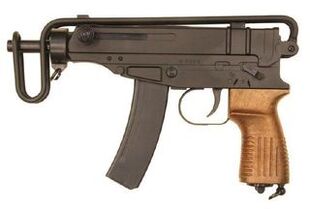 The Škorpion vz. 61, which bears a vague resemblance to the HERC-2 SMG
Add a photo to this gallery
Retrieved from "https://thelaststand.fandom.com/wiki/HERC-2_SMG?oldid=116808"
Community content is available under CC-BY-SA unless otherwise noted.