Not to be confused with the Gas Mask and the HERC Gas Mask.

It is only available to the player through purchasing the Survival Kit and can be seen being worn by the HERC Troopers scattered throughout Uptown and Union Island. It is worn over a balaclava.

It does not provide any real protection and is purely cosmetic.

It is similar in appearance to its TLS:UC incarnation, and can be obtained by opening a Beacon Security Box or Beacon Parts Box, or by purchasing it at The Store. In addition to altering a survivor's appearance, it also provides a 1% bonus to health. 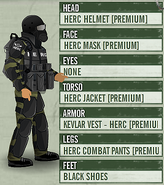 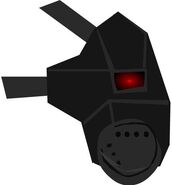 The Alpha 0.99 version of the HERC Mask

A survivor wearing a HERC Mask (TLS:DZ)
Add a photo to this gallery
Retrieved from "https://thelaststand.fandom.com/wiki/HERC_Mask?oldid=117343"
Community content is available under CC-BY-SA unless otherwise noted.