The Hallowed Antler is a component in The Last Stand: Dead Zone. It was only available during the Halloween event in 2014.

A pair of antlers used to construct the Hallowed Shrine.

Antlers are large, branch-like structures that grow from the heads of deer and similar animals. They are used as weapons in combat between males, as hearing aids for moose, to clear snow in the case of reindeers, or while mating. When antlers reach their full size, they fall off and are replaced by new ones.

Found in animal wall mounts (faux or not), hunting shacks and in deers (or similar animals) 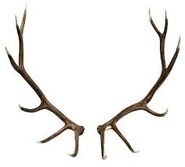 Antlers in real life.
Add a photo to this gallery
Retrieved from "https://thelaststand.fandom.com/wiki/Hallowed_Antler?oldid=128482"
Community content is available under CC-BY-SA unless otherwise noted.