The Hallowed Human Skull is a component in The Last Stand: Dead Zone. It was only available during the Halloween event in 2014.

A human skull used to construct the Hallowed Shrine.

A skull is a set of bones that forms the head, keeps the head's body parts in place, and guards the brain from damage. Skulls include the cheekbones, eye sockets, and the jaws with their teeth. An adult human skull has 28 bones. In symbolism, they are used to represent poison, death, or piracy. Also, some underground groups have used it as part of dark, mystical rituals.

All humans have one, but getting it out of the body is a difficult (and gruesome) process. 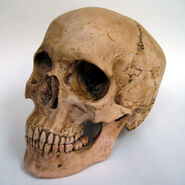 A replica of a human skull.
Add a photo to this gallery
Retrieved from "https://thelaststand.fandom.com/wiki/Hallowed_Human_Skull?oldid=123051"
Community content is available under CC-BY-SA unless otherwise noted.