The Hallowed Skull is a component in The Last Stand: Dead Zone. It was only available during the Halloween event in 2014.

An animal skull used to construct the Hallowed Shrine.

A skull is a set of bones that forms the head, keeps the head's body parts in place, and guards the brain from damage. Skulls include the cheekbones, eye sockets, and the jaws with their teeth. Most vertebrates usually have a skull. Some people use skulls as decoration, or as part of shrines or altars to deities.

Found during All Hallows' Eve or taken from dead cows. 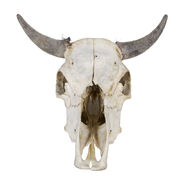 A cow's skull in real life.
Add a photo to this gallery
Retrieved from "https://thelaststand.fandom.com/wiki/Hallowed_Skull?oldid=123052"
Community content is available under CC-BY-SA unless otherwise noted.