Hand Grenades are a type of explosives featured in The Last Stand: Union City.

It can only be obtained through skilled/lucky finds in containers, or through lucky drops from zombies. A high Luck stat and a high Searching skill will assist in finding one.

In addition to its drawbacks from the previous game, it can now bounce back at the player if it hits a wall. It's generally a good idea to throw the grenade in front of a large group and run for cover, as it can kill a player and their companion very easily.

The M67 Grenade, the real life basis for the Hand Grenade

A survivor about to throw a grenade 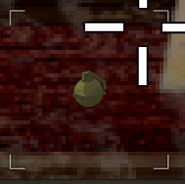 Hand Grenades dropped by a zombie

Damaged Hand Grenades - there is no difference in damage
Add a photo to this gallery
Retrieved from "https://thelaststand.fandom.com/wiki/Hand_Grenades_(TLS:UC)?oldid=121141"
Community content is available under CC-BY-SA unless otherwise noted.