The Hunting Knife is a Premium bladed weapon featured in The Last Stand: Dead Zone.

Primarily used for skinning and cutting up game, these short blades are still thick and sharp enough to gut-in any punk or zombie that dares to mess with you. An essential component in any survivor's survival kit.

A mediocre weapon despite its quick attack speed, due to its low damage per strike. Whilst slightly better than the other melee weapons that can be scavenged early on, it should be replaced with more powerful weapons when they become available. 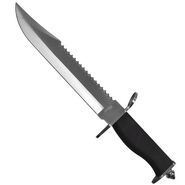 A survivor wielding a
Hunting Knife
Add a photo to this gallery
Retrieved from "https://thelaststand.fandom.com/wiki/Hunting_Knife?oldid=127589"
Community content is available under CC-BY-SA unless otherwise noted.