Injuries are a feature in The Last Stand: Dead Zone. Survivors can receive injuries if they take damage or are incapacitated during missions, raids, compound defense against zombies, and if they are outside a safe zone when the timer expires or the player prematurely ends the mission or raid.

Injuries were initially a basic penalty that players would incur if a survivor was incapacitated during a mission or a compound defense. Survivors who were injured could not be used by the player for a period of time, and could be immediately healed with fuel. Starting in May 2013, the existing injury system was introduced; any injuries from the old system were removed following the update.[1]

Injuries remove a section of the survivor health that can't be healed during missions or raids, as well as decreasing certain character skills depending on the type of injury, and causing a morale penalty depending on the severity of the injury. They are also stackable: up to a maximum of 1 severe injury and 5 minor injuries per survivor at any time.

All injuries heal over time, though they can also be healed immediately using medical items which can be obtained through scavenging in the Dead Zone, recycling certain items or crafting at the Medical Bench.[n 2] A skilled Medic may be necessary for more serious cases. Medical items with a higher grade than is required to treat the injury can also be used, as long as they are of the right type. Injuries can also be treated immediately with fuel, with the cost dependent on the quantity of untreated injuries remaining. 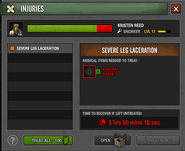 An example of a severe injury.

An injured survivor in a mission.
Add a photo to this gallery

Retrieved from "https://thelaststand.fandom.com/wiki/Injury?oldid=128470"
Community content is available under CC-BY-SA unless otherwise noted.