Jane Tolsh is an NPC in The Last Stand: Union City. She is a member of Jack's group of survivors and is first seen at the Docks safehouse.

Jane was a survivor found by Jack during the course of The Last Stand 2; she was hiding in a gas station in Whistler's Grove when Jack found her while he was out scavenging. She then joined his group and has since journeyed with him towards Union City before settling in their safehouse at the Docks. Jane is armed with her hands (though her pose looks as if she's holding a rifle) while in the safehouse and a Scoped Hunter Compact when she's at the wall guarding the bridge to Union Island. She also wears a unique red cloth band around her head similar to Dana's.

Along with Shawn, she is presumably either killed by the zombies when they come through the wall leading to Union Island or got separated from the rest of the group, as only Dana and Jack are seen at the boat near the end of the game. 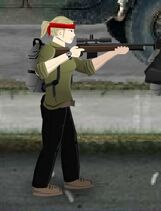 Jane standing guard at the Union Island Bridge with her Scoped Hunter Compact.
Add a photo to this gallery
Retrieved from "https://thelaststand.fandom.com/wiki/Jane?oldid=129546"
Community content is available under CC-BY-SA unless otherwise noted.