The KS-25 is a shotgun featured in The Last Stand: Dead Zone.

An ambidextrous bullpup shotgun built to be as light and compact as possible, the KS-25 uniquely features twin tube magazines to maximize capacity without increasing its size. A switch behind the grip controls which magazine is used, while both are loaded from a port on the bottom of the stock, which also doubles as an ejection port.

Brand new, this shotgun was introduced for military/police use when the outbreak hit.

Its high rate of fire coupled with excellent damage per shot and a very large magazine makes it an effective, if ammo-consuming, close quarters exterminator. Its accuracy and range are underwhelming however, and are likely to put its wielder into harms way. Giving it to a survivor with a high Ranged Combat skill is recommended.

A Kel-Tec KSG, which resembles the KS-25 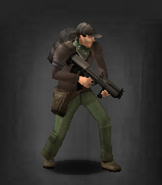 A survivor equipped with the KS-25

A survivor firing the KS-25
Add a photo to this gallery
Retrieved from "https://thelaststand.fandom.com/wiki/KS-25?oldid=130231"
Community content is available under CC-BY-SA unless otherwise noted.