The Kettle is a junk item in The Last Stand: Dead Zone.

The simple act of boiling water wasn't always an easy task. In the past, massive cauldrons held over a fire pit were used. As stoves grew smaller and more compact, cauldrons were replaced with kettles, a small pot with a spout and handle specifically designed for boiling water. Older kettles were filled with water and placed over a stove until it began "whistling," which is caused by the buildup of steam inside the chamber escaping via the openings. Electric kettles that boiled water without an external stove top became popular in the 20th century, and would shut themselves off when the water reached the boiling point.

Sold in many kitchen appliance stores and used by millions of people to boil water for coffee, tea, medicine, or a simple cup of hot water. 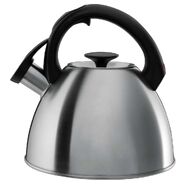 A kettle in real life.
Add a photo to this gallery
Retrieved from "https://thelaststand.fandom.com/wiki/Kettle?oldid=122623"
Community content is available under CC-BY-SA unless otherwise noted.