The Kevlar Vest - Police is an item of clothing/armor featured in The Last Stand: Union City. It can be seen being worn by Armored and Riot Zombies, as well as Shawn Smith, a survivor.

The U.C.P.D.'s standard-issue ballistic vest for S.W.A.T. teams and Riot Control features high levels of protection against both small arms projectiles and melee weaponry. While not as rugged nor as modular as its military counterparts, it is still capable of holding its own against all manner of urban threats.

It reduces the amount of damage taken by the player from all attacks that hit the torso and weighs 10 lbs. 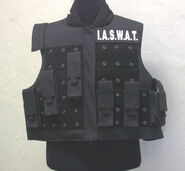 A survivor wearing the Kevlar Vest

The Vest in the game files.
Add a photo to this gallery
Retrieved from "https://thelaststand.fandom.com/wiki/Kevlar_Vest_-_Police?oldid=126742"
Community content is available under CC-BY-SA unless otherwise noted.