The L86-A2 is a light machine gun featured in The Last Stand: Dead Zone.

Based off its bullpup cousin, the L85 assault rifle, the L86 simply adds a longer heavier barrel and a bipod while retaining the same awkward ergonomics. An accurate weapon for designated marksmen, but it lacks a quick-change barrel feature, which limits its ability to provide sustained fire.

Formerly the standard issue LSW[1] of the British Army.

A versatile medium-range weapon that is highly effective in most situations, this weapon is more akin to assault rifles than other LMGs and should be deployed accordingly as a primary rather than support weapon. Its versatility does comes at the price of the massive magazines typical to LMGs, making it much less effective at suppressing/sustained fire. 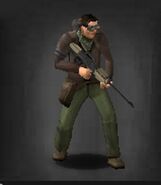 A survivor equipped with the L86-A2 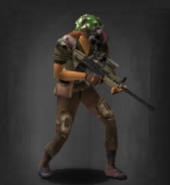 A survivor equipped with the Scoped variant
Add a photo to this gallery
Retrieved from "https://thelaststand.fandom.com/wiki/L86-A2?oldid=130257"
Community content is available under CC-BY-SA unless otherwise noted.