Not to be confused with the Lady Liberty.

"Give me your tired, your poor, Your huddled masses yearning to breathe free," says the Statue of Liberty, who overlooks the harbor of New York City, bringing hope to those who fled their war-stricken, poverty-reigning pasts looking for a new life in the New World. The torch she holds high in the air has seen many replicas made by survivors in desperate times as a declaration of their strength and power, and a declaration of war against the apocalypse that has shattered glass and steel, but has failed to shatter the glass and steel of freedom.

Considered sacrilege for non-patriots to touch the torch of America.

Identical to its predecessor, its high damage and knockback makes it very effective in taking out small groups of strong zombies. Its slow attack speed, however, makes it more of a support weapon backed up by faster-firing guns. 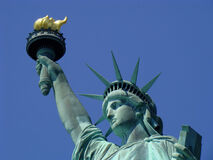 The iconic Statue of Liberty holding up the torch, the basis of the Lady Liberty weapon
Add a photo to this gallery
Retrieved from "https://thelaststand.fandom.com/wiki/Lady_Liberty_II?oldid=111770"
Community content is available under CC-BY-SA unless otherwise noted.