Looter is a Resource book featured in The Last Stand: Dead Zone.

Who needs fuel when there's weapons and gear and books!?

Think about it. Who the heck needs a colorless, toxic, flammable liquid when there's so much shiny stuff out there! Shiny weapons that kill in one hit, vests and gloves that makes you look like Ironman, and books like this one; they are all far more valuable than some liquid in a jerrycan.

Can be found in the dumpsters behind the offices of fuel companies. 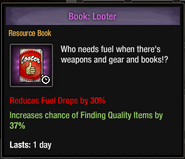 Add a photo to this gallery
Retrieved from "https://thelaststand.fandom.com/wiki/Looter?oldid=110324"
Community content is available under CC-BY-SA unless otherwise noted.