The Lump of Wood is an improvised melee weapon featured in The Last Stand: Dead Zone.

Basically a 2x4 with a nail stuck in one end, this is nearly ubiquitous in the homes of DIY home improvement practitioners all over America. An excellent emergency weapon for survivors who need to puncture some skulls in a pinch.

Can be made at home with the right materials.

Cheap to make and quick to strike, this will serve the player well early on. However, its low damage means higher level zombies can take multiple strikes to bring down, which, when combined with its short reach, can greatly endanger the wielder. 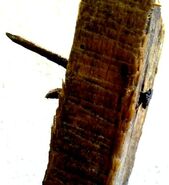 A 2x4, with a nasty looking nail attached to it...

A survivor equipped with the Lump of Wood
Add a photo to this gallery
Retrieved from "https://thelaststand.fandom.com/wiki/Lump_of_Wood?oldid=96956"
Community content is available under CC-BY-SA unless otherwise noted.