This article is about the version in TLS:DZ. For other versions, see M16A2 (TLS:UC). For an overview, see M16A2 (overview).

The M16A2 is an assault rifle featured in The Last Stand: Dead Zone.

An above-average weapon in nearly every aspect. It hits decently hard, has a good range and is slightly more accurate than other assault rifles. However, it is limited to 3-round bursts instead of automatic fire. While it can fire those bursts quickly, this feature heavily reduces its firepower. Best used to support other survivors at medium range.

A survivor equipped with the M16A2

A survivor carrying a unique version of the M16A2. Looks like the National Guard.

A survivor equipped with the Scoped variant 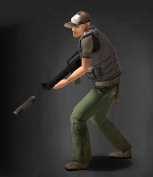 A survivor firing a Scoped M16A2 in-game
Add a photo to this gallery
Retrieved from "https://thelaststand.fandom.com/wiki/M16A2_(TLS:DZ)?oldid=128426"
Community content is available under CC-BY-SA unless otherwise noted.