The M60-E6 is a light machine gun featured in The Last Stand: Dead Zone.

The latest incarnation of the venerable M60 series has ironed out the reliability issues that had caused its predecessors to be replaced by the M249 SAW and M-240. Already one of the lightest 7.62mm LMGs around, the E6 model is even lighter, making it perfect for special operations units who need some heavy firepower while travelling light.

Primarily in use with the Coast Guard and reserve units. It's also the LMG of choice for the Navy SEALs.

With decent damage per shot, a high rate of fire and an incredibly massive magazine, this weapon is the very epitome of spray-and-pray, capable of laying down fire for extended periods of time, though at a high cost in ammunition. However, its incredible power is mitigated by its low accuracy, making it best suited to a survivor with either a high Ranged Combat skill and/or the LMG specialization. It also reloads at the very slow pace typical of a belt-fed weapon, necessitating cover by other survivors while doing so. 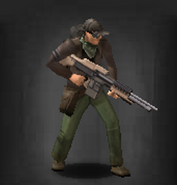 A survivor equipped with the M60-E6

A survivor equipped with the Scoped variant

A survivor firing an M60-E6 in combat 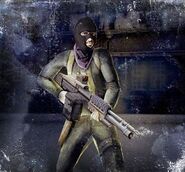 Retrieved from "https://thelaststand.fandom.com/wiki/M60-E6?oldid=130492"
Community content is available under CC-BY-SA unless otherwise noted.