The M79 Grenade Launcher is a grenade launcher featured in The Last Stand: Union City.

Styled like a break-action shotgun, the M79 bridged the gap between hand grenades and mortars, and saw service during the Vietnam War before the advent of more practical under-barrel designs. Due to its great effective range, however, a few armies still use it in niche roles, such as bomb disposal and riot control.

Equipped in limited numbers by the military.

The grenade launched from this weapon travels at a slight arc and will not detonate until it travels a certain distance, meaning it is best used in open areas. While the arming distance safety protects the user from being killed by their own weapon, it also makes it useless at close range. Another drawback is that its ammo is hard to find, so it should only be used sparingly on large groups.

The M79 in real life 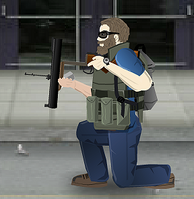 The M79 in action

Firing the M79 at a group of zombies (Alpha)
Add a photo to this gallery
Retrieved from "https://thelaststand.fandom.com/wiki/M79_Grenade_Launcher?oldid=114543"
Community content is available under CC-BY-SA unless otherwise noted.