The MP5 is a submachine gun featured in The Last Stand: Union City.

A modern German SMG considered to be the weapon of choice for ERTs and Special Forces units engaged in counter-terrorism; its unmatched combination of accuracy, firepower, and reliability has made it the most prolific submachine gun in the world, serving in over forty countries and manufactured in several of them under license.

Most major law enforcement and other government agencies (including HERC) have MP5s in their arsenals.

Its stopping power may leave something to be desired, but it is good at clearing away groups of zombies earlier on in the game, and has easily obtained ammo, making spraying and praying a less costly tactic. It is also lighter and more accurate than the Uzi, and should be the preferred 9mm SMG.

The MP5A3 in real life 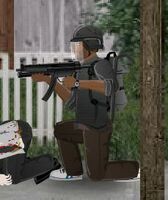 Survivor prepared with the MP5 (Alpha) 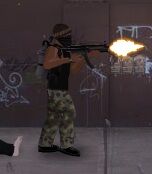 A survivor firing the MP5 (Alpha)

Hank with an MP5 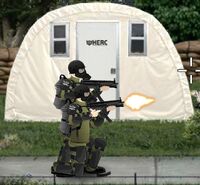 HERC troopers firing their MP5s at an intruder

Retrieved from "https://thelaststand.fandom.com/wiki/MP5?oldid=131677"
Community content is available under CC-BY-SA unless otherwise noted.